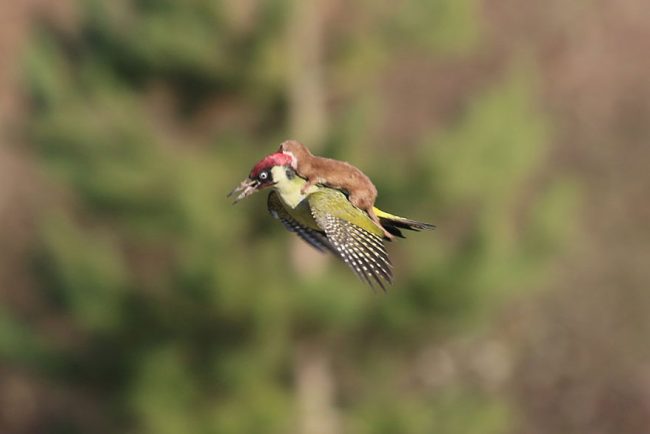 East London-based photographer Martin Le-May made some great photographs, and some of them incorporate an infant weasel and a woodpecker. There’s a comical story behind the recording.

Le-May saw the “battle” at Hornchurch Country Park as he was getting a charge out of the delightful day. He heard the commotion, and saw these two battling.

The woodpecker flew past Le-May, yet there was something on its back. The weasel. Along these lines, Le-May couldn’t miss the minute and took some extremely funny photographs.

The adorable team was really occupied with a battle forever. The flying creature landed, and the weasel spotted Le-May and his better half. This gave the woodpecker sufficient opportunity to fly up in the encompassing trees. The weasel couldn’t do anything besides flee hungry.

Weasels burglarize homes, and this infant was likely planning to get a free dinner. All things considered, the woodpecker didn’t surrender without a battle. Flying creature lover Jason Ward was the first to share the photographs, taking note of that these two are closest companions. He didn’t know the genuine story.

As per specialists, the winged animal is European green woodpecker, a breed that discharges boisterous sounds. These feathered creatures feed with ants, and grow 210-216mm long with a 320-330mm wingspan.

Stebe Backshall, a natural life moderator, says it isn’t bizarre for these flying creatures to fly, and he was astounded that the woodpecker did it with a weasel on its back.