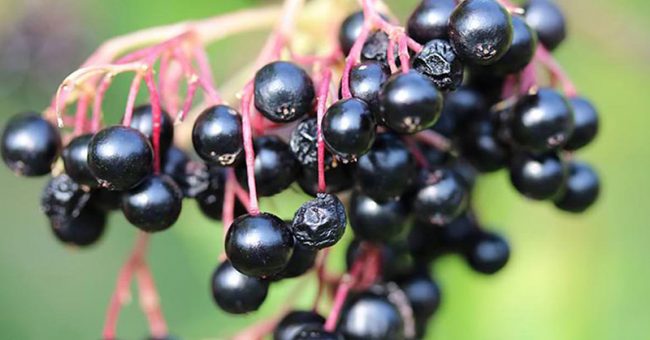 Elderberry has been known to man since the prehistoric period, according to scientists, and elderberry recipes were widely used as natural remedies in ancient Egypt.

Because of its various health advantages, Hippocrates, the “father of medicine” from ancient Greece, portrayed it as his “medicine chest.”

During the 1995 Panama flu outbreak, the government used it as a natural means to combat the flu, and it served to decrease the incidence of the flu and thereby help to end the epidemic.

Elderberry is a herb that is native to Africa, Europe, and areas of Asia. Sambucus is a flowering plant genus in the Adoxaceae family, and its berries and flowers are effective natural medicines. The plant has deciduous leaves, white flowers (elderflowers), and berries that ripen from green to red to black.

Sambucus nigra is also known as European elder, European elderberry, black elder, and European black elderberry. The flowers have 0.3 percent essential oil, and is made up of free fatty acids and alkanes, and the fruit has rutin, quercetin, kaempferol, phenolic acids, and anthocyanins. Elderberry is also rich in flavonoids, which are strong antioxidants that protect cells from injury, and anthocyanidins, which are chemical compounds that are immunostimulant properties.

Elderberries are high in iron and potassium, as well as vitamins A, C, and B6. The raw berries are comprised of roughly 80% sugar, 18% carbohydrates, and less than 1% protein and fat.

“Elderberry has a long and extensive tradition of medicinal use by many civilizations. It is protective against infections such as influenza, herpes, viral infections, and bacterial infections. Elderberry can be used as a natural treatment for influenza A and B, according to a report published in the Journal of Traditional and Complementary Medicine.

This is due to its effectiveness against all strains of influenza virus studied, clinical outcomes, low cost, and lack of side effects. Many aspects of the elderberry can be used — the flowers, bark, stems, and leaves are frequently used for their excellent health benefits.”

This awesome plant contains more flavonoids than blueberries, cranberries, goji berries, and blackberries, and it has the following health benefits:

Elderberries improve the immune system due to the inclusion of anthocyanidins, which are chemical compounds with strong immunostimulant properties. Elderberry extract is one of the most effective and best therapies for cold and flu symptoms.

Numerous experiments have been performed by scientists that have documented the effective effects of elderberry extract in the prevention and management of influenza symptoms.

Normal sinus relief is provided by the potent anti-inflammatory and antioxidant effects. Swiss researchers studied the effects of Sinupret, a patented medicine containing elderberry flowers, in the treatment of bacterial sinusitis in conjunction with an antibiotic (doxycycline or Vibramycin) and a decongestant, and discovered that it enhanced the effects of the drugs.

For decades, the berry and flower have been used to treat diabetes. Elderflower extract has been shown to promote glucose synthesis and insulin release, lowering blood sugar levels.

The flowers of the elder plant are an important herbal allergy treatment because they improve the immune system and soothe inflammation. It cleanses the liver and removes toxins, and herbalists say it treats hay fever-like symptoms.

Since this plant has good diuretic effects, it successfully combats water retention.

Elderberry is often used in beauty products because it contains antioxidants, vitamin A, and bioflavonoids, which enhance the appearance of the skin, avoid premature aging, and provide a healthy skin glow.

Elderberry can be purchased online or at a closest health food shop. It is available in juice, tea, jelly and preserves, wine, ointments, cream, syrups, tablets, lozenges, sprays, and capsules.

The easiest way to cure the flu, colds, and upper respiratory issues is with elderberry syrup, so here’s how to produce it:

Pour the water into a saucepan and add the elderberries, cinnamon, and ginger. Bring the syrup to a boil, then reduce to a low heat and allow it to simmer for 45 minutes, sealed. Then, remove the saucepan from the sun, mash the berries, and strain into a glass bowl using a strainer or cheesecloth. Load the sugar into a sterilized glass jar and sweeten with honey.