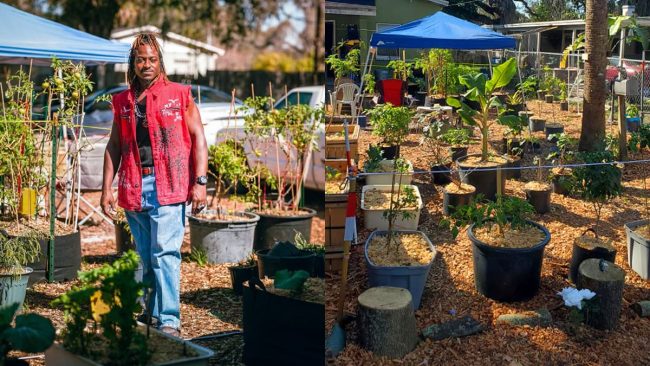 As a result of the coronavirus outbreak, American citizens received federal stimulus checks. The federal stimulus was spent by many people on necessities such as food, rent, mortgage, utilities, and so on.

On the other hand, there are those who are ambitious and have spent their stimulus on a long-term project. The man is originally from East Tampa, Florida. He spent money on constructing his own garden at home in order to produce his own food.

Michael Chaney, aka “Spirit Mike,” has been gardening since the beginning of the pandemic. This was not always the case. Since the pandemic outbreak, when supermarkets were unable to meet the needs of the citizens, his focus on gardening has become total dedication. All started as a hobby, and currently, gardening is his passion!

He purchased pots and began growing tomatoes with the first stimulus check. He sought advice from the knowledgeable gardeners at A Land of Delight Natural Farm. From there, he purchased some materials and received some advice.

His property is three acres in size.

“I practice bio-intensive gardening, which entails planting as much as possible in a small space. I chose these types of fruits [dwarf plants] specifically because they produce fruit quickly.”

We can deduce from his interview that moringa trees are his favorite. These trees are valuable because of the benefits they provide, which include high levels of vitamin C, antifungal, antiviral, and anti-inflammatory properties.
“That is Michael Jordan and Kobe Bryant combined,”
“If you were stranded somewhere with nothing but this and water, you would not only survive, but thrive,”
“I don’t exercise. I lost 65 pounds by simply adding this to my diet and adding flaxseed fiber.”

Chaney also stated that he owns chickens. He paid $3 for one of the chicks.
As he stated, his goal is to have no food costs.

“The successful gardener has planned his garden so that it is easy to manage!”
You’ll need to plan your garden. Do your homework before putting money down because you want your money to go as far as it can.”