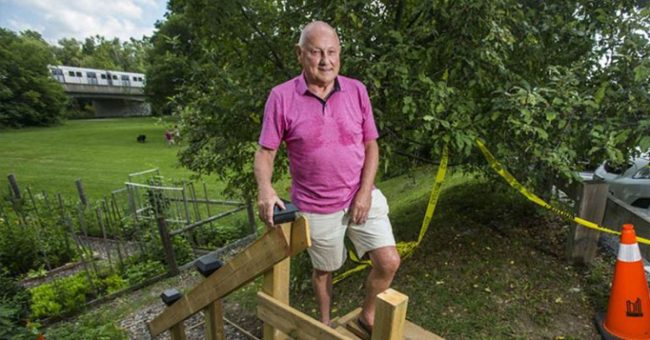 There are occasions when you simply must take matters into your own hands if you want things to be completed.

That’s exactly what this Toronto man did when his community garden desperately needed new park stairs. The city has now threatened to remove them.

Adi Astl of Etobicoke, Toronto, Canada, couldn’t stand watching his friends and neighbors struggle, slip, and fall down the steep hill that leads down to their community garden in Tom Riley Park in the summer of 2017. He no longer had the patience to wait for the estimated $65,000 to $150,000 city project to solve the problem, so he took action on his own.

“People’s safety is more important to me than money,” he said. “So, if the city is unwilling to do it, I must do it myself.”

With the help of community donations, Astl, a retired mechanic, built the staircase for only $550. He even hired a homeless person to assist him with this task.

Last year, one of their neighbors slipped and broke her wrist while navigating the hill. Many people were outraged after that incident because it took too long for the city to act to solve the problem.

“We have far too much bureaucracy,” said Dana Beamon, a community member. “I’m impressed because our city doesn’t have enough self-initiative.”

Despite this, it didn’t take long for city bylaw officers to use caution tape to block off the park stairs.

Astl’s custom build, according to Mayor John Tory, was the reason for the city’s dissatisfaction with the work. The two most pressing concerns were safety and accessibility. The steps were not built according to code, according to city inspectors. There were three major issues with them:
— Unsafe railings

— There is no foundation.

The mayor also stated that the hill is a shortcut from the parking lot to the garden and that there is another accessible path to the garden.

Despite the fact that the city removed Astl’s stairs, they were replaced with a version that they approved. But Astl wasn’t bitter about it because he was just glad that something was finally done about this issue.

“I was relieved last night when the mayor phoned me… to thank me for assisting the city in realizing what they were doing was wrong,” he told CTV News Channel in July 2017. “A huge stone fell from my heart and said, ‘Now we’re going to get somewhere in terms of helping people be safe

In a written statement issued just before the reconstruction began, the mayor expressed gratitude to Astl for his assistance in initiating the project’s completion.

“I want to thank Mr. Astl for speaking out on this issue,” the mayor said. “His homemade steps sent a message that I am sure City Staff heard loud and clear.”

The new steps were estimated to cost $10,000 and were built in a matter of days. The mayor promised that future project estimates would be far more realistic.