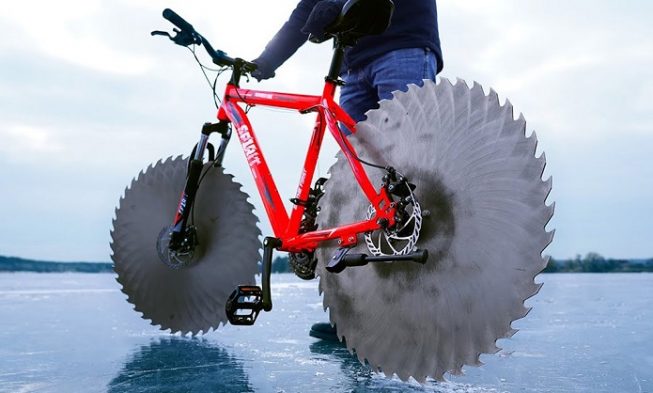 Because of the subzero conditions that arrive with every winter season, the product-hacking engineer known as The Q got extremely imaginative.

He had an idea while looking at the frozen lakes. When a lake freezes, people may either look at it on foot or walk on it on ice skates. Considering these two alternatives, he felt it would be wonderful if there was a third choice that people might explore.

He planned to replace his bicycle wheels with circular sawmill blades. That way, he might gain ice experience. He chose the name “Icycyle” for his creation.

Developing the “Icycyle”
He became preoccupied with creating his concept. He began by removing his bike’s original tires and spokes in order to replace them with massive steel disks with razor blades on the edges. When he tested the bike, he discovered that the sharp blades sliced right through the ice, making it impossible for him to ride it on the surface.

He immediately began thinking about how to remedy the problem and improve his product. He returned his bike to his workshop and experimented with adding additional metal pieces to each of the blades. The second test drive went off without a hitch. On YouTube, there is a video of the engineer riding on the lake’s surface with little difficulty.

In any case, this isn’t the first time this inventor has replaced regular bike wheels. In 2019, an extraordinary and very imaginative engineer created a pair of spinners with several running shoes attached to the ends of huge spokes. The end result was a rough ride, which is the polar opposite of his most recent hack.