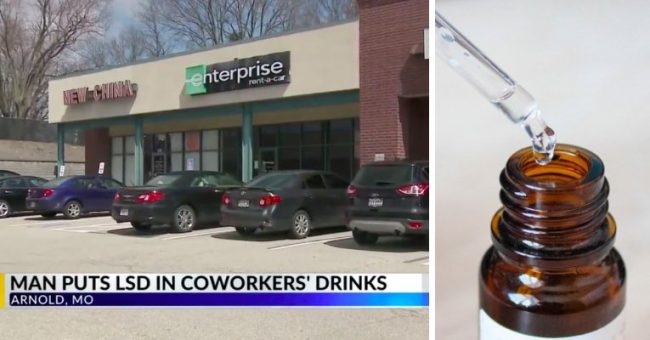 The bad vibe in the office may be overpowering at times, and individuals seek various methods to escape. A juvenile male employee at Enterprise Rent-A-Car in Arnold, Missouri, had an unusual idea: he would make his coworkers trip balls.

According to authorities, the 19-year-old administered a large amount of LSD to a couple of his surprised employees in an attempt to address what he referred to as their “bad energy.”

According to Arnold Police Lt. Clinton Wooldridge, the police were called when two employees grew disoriented and began shaking for no apparent reason.

The 27-year-old boss saw the 19-year-old employee was “acting funny” and carrying a water dropper and “messing with” her water jug that same morning. She also stated that he was tampering with the water bottles of the two employees prior to their symptoms manifesting.

The coworkers, ages 23 and 24, were finally brought to an urgent care center before being moved to a nearby hospital as the medicines wore off.

To the police, the perpetrator acknowledged to dosing the water bottles with acid and putting LSD in the coffee of a third employee. He remarked that his employees were too tense, and he believed they needed more vitality.

Arnold Police conducted field testing on the water jug that the teenage worker reportedly dosed, but the findings were inconclusive.

The symptoms of the workers were consistent with LSD responses, according to task force leader Sgt. Tony Dennis of the Jefferson County Sheriff’s Department.

According to a recent National Safety Council (NSC) research, accidental opioid overdose has surpassed car accidents as the biggest cause of unintentional fatalities in the United States.

Americans have a one-in-96 risk of dying from an opioid overdose, whereas the likelihood of dying in a car accident is one in 103.

LSD, or lysergic acid diethylamide, is a hallucinogen defined as “one of the most potent mood-changing substances” by the Partnership for Drug-Free Kids.

The liquid form utilized by the Enterprise employee is colorless and tasteless, thus it would have gone undetected when mixed into the beverages of his unsuspecting coworkers. It normally starts within 20 minutes, and because each trip is unique to the individual, the symptoms and reactions are unpredictable.

It has also been studied as a possible therapy for depression and other mood disorders, however greater dosages can create altered sensory awareness, hallucinations, and an enhanced mood or euphoria owing to raised serotonin levels in the brain.

People questioned on Arnold’s streets were angry by the suspect’s alleged acts and demanded that he face repercussions. The young employee was arrested and then released, and it was stated that no charges had been brought against him as of yet.

He is claimed to no longer work at the facility, and his identity has not been revealed since he has not yet been charged, although he faces second-degree murder charges.