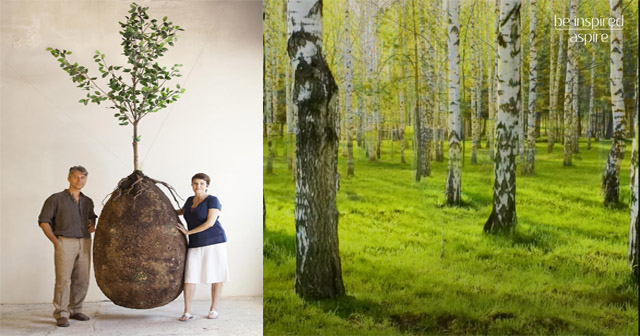 People began to challenge all traditions, which is undeniably desirable since it causes revolutionary changes in society. As a result, many people are reconsidering their attitude about death, and a new Italian project has introduced an intriguing new thought.

The “Capsula Mundi” proposal by Italian designers Anna Citelli and Raoul Bretzel includes the transformation of the body after death into a seed of a tree.

They came up with the concept in 2003, after witnessing loads of furniture being thrown at the end of Milan’s annual design showcase, “Salone del Mobile.”

“There was a lot of competition to develop new things, but nearly no one concerned about the long-term consequences or whether these products would ever be used. We began to consider ideas with an environmental component.

Instead than using wooden coffins, the couple designed an organic and disposable capsule. In this way, the departed will supply nutrients for a tree of their choosing, which will be planted over the location where they were buried.

“It is an egg-shaped pod, an old and exquisite form made of biodegradable material, where our deceased loved ones are buried. Ashes will be kept in little egg-shaped bio urns, while corpses will be put down in bigger pods in a fetal posture. The Capsula will subsequently be buried in the ground like a seed.”

The corpse is inserted in a fetal position in the biodegradable capsule. On top of the capsule, a tree or a tree seed is planted.

The capsule is put in the soil like a seed.

The capsule is constructed completely of biodegradable starch plastic.