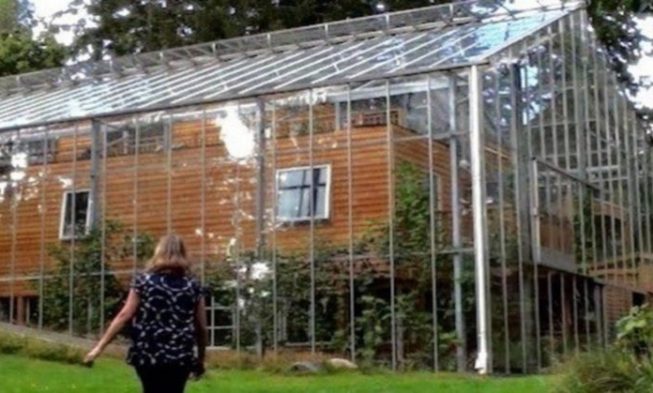 There’s an ancient adage that reads, “Those who dwell in a glass house shouldn’t throw stones.” However, nothing has been stated regarding fruits and vegetables. Living in a glass house has become a reality for one Swedish family. Well, sort of. What they actually done was construct a greenhouse around their house!

Charles Sacilotto and Marie Grammar were eager to discover a way out of Sweden’s harsh winters, and they intended to do so in an environmentally responsible manner. As the most appealing alternative, they devised the construction of a greenhouse around their home. As a result, they can heat their home and cultivate their own food.

Charles, an engineer by trade, was inspired to participate in this activity by his mentor, Swedish architect Bengt Warne. He built this house about ten years ago for about €80,000, but the environmental and economic benefits are enormous

The home is known as the Naturhus (Nature House), and it is encircled with 4mm security glass panes. Charles is confident that this glass is quite safe, and even if it does break, it is designed to fall in little bits, which will not injure anyone.

The heat in the home is intended to originate from the sunshine that comes through the windows, and the heat throughout the night may be maintained by the residual heat that remains. The added bonus is that kids will be able to develop their own garden all year.

The Advantages of a Greenhouse

Because of Sweden’s severe winters, producing fruits and vegetables is only possible from April to early October, which is a very short duration. But this pair will be able to cultivate them whenever they want in their greenhouse!

Cucumbers, figs, grapes, herbs, and tomatoes, among other foods that are unlikely to thrive in Scandinavian winters, may be found in their greenhouse. Plants are immediately next to fruits and vegetables, and they are recognized for cleaning the air and eliminating pollutants. Anyway, making the place more visually appealing doesn’t harm either.

As previously said, Charles is an engineer, therefore he devised a method to collect rainwater for their own use as well as for the plants. He also planned and built the sewerage system, as well as a composer for their garden. He ensured that they would constantly be fertilized and recycled back into their own environment in this manner.

It appears that living in a greenhouse might make winter more bearable. And who knows, maybe one day all of us may be able to live in such a place, but until then, we’ll have to keep wrapping up and huddling close to the fire.