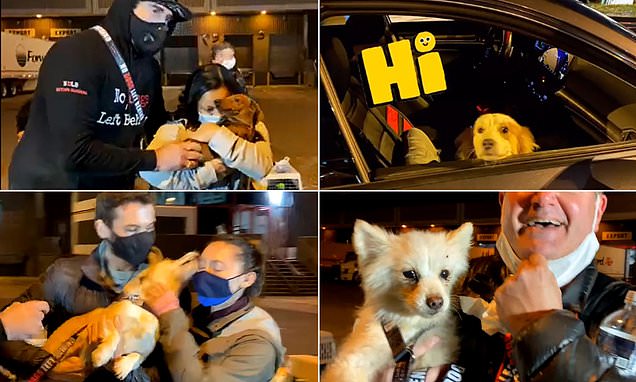 An American organization rescues pups from the illicit dog meat trade in China and brings them to New York to meet their new owners for the second day in a row.

As many as 30 million dogs per year are killed for their flesh throughout Asia, thus eliminating this terrible trade is incredibly difficult and needs a true knowledge of the situation on the ground as well as a multi-layered approach.

For the past four years, an American organization has had “boots on the ground” in China, protecting canines from the illicit dog meat trade.

No Dogs Left Behind collaborates with local activists on the ground, rescuing dogs from slaughterhouses, dog meat trucks, wet markets, and traffickers.

They rescued 34 puppies a week ago and flew them to New York to meet their new owners. The second cargo of dogs landed at JFK Airport the next day. For the survivors of China’s meat trade, the air was filled with pleasure!

No Dogs Left Behind, a four-year-old organization, operates a shelter in Beijing and has been on a mission to rescue dogs from China’s meat trade and locate individuals in the United States who will adopt them.

The first shipment’s 34 dogs were introduced to their new owners at the airport on Friday evening, and an additional 45 dogs arrived at JFK on Saturday afternoon, travelling with Air China.

No Dogs Left Behind continues to rescue pups from China and transfer them to the United States.

Tiger has another opportunity to start a new life in the United States.

Families waited for their new puppies at the airport, and others had planned the adoption from China months in advance.

Instagram user ‘avonjunkies’ announced the arrival of his new pet, Floyd, and expressed his gratitude to No Dogs Left Behind for making it possible.

Another, ‘dancehalllovenyc,’ said on their Instagram Story, ‘Tiger getting ready to go home,’ with three heart emojis and a photo of Tiger climbing into its carrier.

Several dogs were said to have perished before they could board the plane to the United States. No Dogs Left Behind is looking into the situation because they have not received an explanation for the reason of their deaths.

No dog has been Left behind. We have to make this like to go Viral and reach lifetime awareness.

No Dogs Left Behind aims to bring a total of 135 dogs to the United States in the near future.

Jessica Bush shared a video and snapshot of one of the adoptions on Facebook with the caption:

‘Wow! What a day! Lola, our new adopted member from No Dogs Left Behind, met us at JFK today as they arrived from China. Thank you, Jeffrey Beri, and your incredibly caring crew. Lola is adjusting rapidly! We adore her. Carly Weinstein is overjoyed!’

Activists from No Dogs Left Behind confront meat smugglers in China.

Jeff Beri, the 56-year-old founder of No Pets Left Behind, and his crew have saved hundreds of dogs. They must employ a variety of strategies in order to save the puppies from imminent death. Drones are frequently used to follow the meat dealers.

“This is by far the largest transfer we have ever done.

These pups… are my heroes, as are the adopters who have been waiting for their pets for over a year, and every dog on the streets is an advocate for the cruelty-free cause that we are working for.